About National Dalit Watch of NCDHR

NDW-Monitoring Disaster Response and Preparedness for Inclusion and Equity 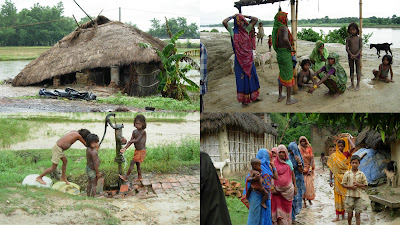 The National Dalit Watch (NDW) is an effort spearheaded by the National Campaign on Dalit Human Rights (www.ncdhr.org.in). NCDHR learned of rampant caste discrimination during the Indian Ocean Tsunami in Tamil Nadu (2004) and made visits to the affected regions, following which a comprehensive study was conducted by *International Dalit Solidarity Network of Netherlands. Subsequent to the field visit a National Public Hearing was jointly organized by together with Human Rights Forum for Dalit Liberation (HRFDL) and Dalit Mannurimai Kootamaippu (DMK), on Discrimination against Dalits in Tsunami Relief and Rehabilitation, at Nungampakkam, Chennai, in August 2005. More than 1000 Dalit victims from the whole of Tamil Nadu participated in the Public Hearing. NGOs and other Dalit organizations working in the coasts of Tamil Nadu also took part extensively.

Eventually, NCDHR took up many advocacy interventions together with HRFDL viz. appealing to the governmental and non governmental bodies, reporting the situation and submitting memoranda to high officials, organizing meetings, workshops, seminars and demonstrations to ensure that the Tsunami-affected Dalits had an equal opportunity to rebuild their lives and communities. The National Public Hearing was one of the major social action programmes to ensure justice to Tsunami hit Dalit survivors.

The inspiration and motivation to initiate the NDW has undoubtedly emerged from the learning and achievements of Dalit Watch – Bihar (DW-B). Initially with Dalit Samanway, a flash survey was done in 1970 villages in 123 blocks in 11 districts which confirmed the discrimination. A platform was formed with organizations and networks - Bchpan Bachao Andolan, Baarh Sukhad Mukti Andolan, Dalit Samanway, Lokshakti Sangathan, and Nari Gunjan from Bihar, spearheaded and supported by NCDHR and PRAXIS (Patna).  DW-B monitored the status of inclusion of Dalit communities in relief and rehabilitation, and came out with a report which described the serious situation of the Dalits in all the flood affected districts, and exposed exclusion and discrimination all along in 2007*. This was explored systematically and scientifically through a relief audit that scanned 205 relief camps in five districts as well as a study on community managed disaster risk reduction in September 2008*. These reports were perhaps the first of their kind and served as tools of advocacy. The NDW works collaboratively with organizations striving for the protection of human rights, and those particularly working for Dalit human rights during disaster situations.

NDW over the past two years has instituted tools and methods to identify, expose and document this form of discrimination. This has enabled many Dalit rights organizations, local activists and the community leadership to monitor exclusion effectively during disasters. NDW has initiated the process of advocacy and mobilization to pressurize the state to take corrective steps, institute a policy environment that recognizes and counters such discrimination and defines entitlement of survivors in manner that makes the state accountable.

NDW with its constituent Dalit rights organizations, at present, has its interventions in the flood belt of Bihar,  and Andhra Pradesh.
THE OBJECTIVES

• To get in place a just system of Recovery and Rehabilitation;

• To develop a vulnerability mapping tool which would also assist other organizations in assessing vulnerability causes of the socially excluded sections;&

• To advocate policies and legislation that recognize discrimination that exists by default, and thereby make it imperative for state and its agencies to have a special focus on the inclusion of Dalits and other marginalized communities.

A series of disasters, including the Gujarat earthquake (2001), tsunami (2004), Bihar floods (2007 and 2008), Assam floods over several years (particularly 2009), Andhra Pradesh and Karnataka (2009) have highlighted the degree to which, by virtue of their inherent socio-economic vulnerability, Dalits have been systematically excluded from relief and rehabilitation efforts. In a caste-ridden society and polity as in , discrimination in disaster response is highly predictable; discrimination happens by default. NDW strives to identify, expose and eliminate such form of discrimination by default.

‘Discrimination by default’ is as much an issue as discrimination by norm and intent and is prevalent both within civil society and administration. Even in cases where there is no intentional bias against Dalit communities, the lack of knowledge about their vulnerabilities, not mapping these communities in the context of the disaster and prevalent norms of operations result in the administration not taking the cause of Dalit and other marginalized communities in times of disaster. Often this is also co-existent and accentuated with the overt and covert dominant community bias and pressures.
NDW monitors such “unintended” exclusion from a perspective of Dalit Human Rights, with a clear cut agenda of treating such exclusion as serious human rights violation as any other form of violation; and demanding state’s accountability in ensuring protection of Dalit Rights in this sphere too.

With this principle at work, NDW has established district and block level Information and Action centres (IACs) in . These are supposed to be the nodal centres to carry on the monitoring function through its already trained personnel and volunteer cadre in the villages. The IACs are envisaged to be a model that would be a pre-cursor for an effective community – state interface at the Panchayat, block and district level, which would eventually eliminate all forms of discrimination and exclusion in the context of disasters.

STRATEGIC INTERVENTIONS
NDW through its allies, monitors Dalit exclusion and discrimination at different tiers of relief and rehabilitation process. Since its formation, NDW has undertaken eye opening studies in , Andhra Pradesh and Karnataka floods of 2009. To have a constant monitoring of the pre-during- post flood situation, Information and Action Centres (IACs) have been set up in .

Dalit Watch  in partnership with National Dalit Watch
The widespread devastation across twenty-two districts of the state during the 2007 floods in  caused tremendous concern within NCDHR regarding the Dalit situation in the affected areas. NCDHR, along with reputed local organizations (Nari Gunjan, Dalit Samanvay, Barh-Sukhad Mukti Andolan and Lokshakti Sangathan) conducted a rapid and extensive survey of over 2000 flood affected villages, ably supported by PRAXIS through participatory research methods. The findings corroborated with concrete data, the only too obvious exclusion of Dalits in rescue and relief operations of the state. The scale of discrimination and exclusion was so huge and shocking; all these organizations decided to come together to address this serious humanitarian crisis. Thus “Dalit Watch –” (DW-B) came into existence.

Even before the trauma of the 2007 floods had passed  was struck by the Kosi floods in 2008; a national calamity of enormous proportions. Millions of survivors are still languishing, unable to recover from the impact of this man-made disaster. DW-B monitored the situation of Dalits in relief camps and exposed the abysmal conditions of Dalits in these camps. It became quite evident that discrimination by default was the norm and there had to be sustained efforts to counter such exclusion and to ensure inclusion of Dalits. DW-B geared itself to undertake this mission over the coming years.
The partnership of DW-B with NDW aims at supporting and handholding 18 Information and Action Centres (IACs), the nodal centres being developed over six districts, to carry on the monitoring function through trained personnel and volunteer cadre in the villages. Besides pressurizing the authorities at state and district levels, to report on the basis of disaggregated data for all the vulnerable groups, mainly Dalits, and also women, disabled, children and aged, particularly belonging to the marginalized communities, DW-B is engaged at preparing local cadres and leadership to monitor the disaster preparedness and response from the perspective of inclusion and equity at district and block levels.

National Dalit Watch in partnership with the Rural Volunteers Centre
The disastrous flood in the north east, in the same year 2009, displaced 400,000 people. Floods in the north-east, particularly , are a recurrent phenomenon. National Dalit Watch together with the Rural Volunteers Centre, an NGO working on flood plains of  conducted a study to take stock of implementation of “Calamity Relief Fund” in ten SC villages, covering 500 families.

The study revealed the information deficit at the community level about the CRF provisions and the total negligence of the government in implementing those provisions. The study throws light on the complete breakdown of any state/central government machinery to help the survivors of flood regain normalcy.

National Dalit Watch in partnership with Dalit Watch Andhra Pradesh
The state of Andhra Pradesh and Karnataka faced both the severity of the drought and cruelty of floods, yet again in the same year, in September-October 2009. Sudden depressions in Bay of Bengal caused heavy downpour in the catchment areas of Tungabhadra and  rivers causing heavy flooding of both these rivers.

NDW with Dalit Watch-AP conducted the study of 308 villages of the 565 affected villages of five district of Karnool, Mahboobnagar, Nalgond, Krishna and . A significant number of people in the SC and ST habitations weren’t aware of the government relief package. It was found that the distribution of relief materials was controlled by political interest; and relief didn’t reach the interior places.

Subsequently, a second phase survey was conducted in AP, in March 2010, to explore specific cases of exclusion in Relief and Rehabilitation entitlements of flood affected Dalits in  and Mahboobnagar districts. 47 villages in  and 33 villages in Mahboobnagar were covered. The findings revealed the non receipt of due entitlements to hundreds of SC and ST survivors as per the prescribed norms of revised CRF and NCCF guidelines in conjunction with specific instances of caste based exclusion.

National Dalit Watch in partnership with HRFDL-K
Almost five months after the devastation caused by 2009 floods in Karnataka, a joint study was undertaken by National Dalit Watch and Human Rights Forum for Dalit Liberation, a  based NGO, in March 2010.

An overwhelming number of Dalits confirmed non receipt of suitable compensation. The main reasons behind the dissatisfaction among the survivors was found to be the lack of proper survey of Dalit colonies, lack of scientific and professional assessment of the damage caused by the floods, and of course, large-scale corruption especially at the local level.

THE ROAD AHEAD
It is highly imperative to have state accountability during disasters; accountability that takes cognizance of basic structural and causative reasons for exclusion and discrimination during disasters. Only this recognition can lead to concerted and relevant action to counter this aspect of denial of the basic rights of Dalit citizens. It is important for the state and its agencies and the international agencies to consciously include this dimension in their programme planning, implementation and monitoring. Only then can there be a deliberate and planned move towards inclusion. NDW will examine the deficiencies in the existing policy and disaster response / preparedness regime to make an impact. Focused endeavours are on for achieving equitable policies through policy advocacy at all levels.

National Dalit Watch-NCDHR
New Delhi, New Delhi, India
A large number of people affected by disasters, in India, are excluded from just recovery and rehabilitation due to various forms of vulnerabilities posed by social stratification and discrimination based on caste, gender, age, ethnicity and sometimes religion. Such discrimination and exclusion that exist in society gets magnified during calamities. National Dalit Watch, since 2009, is working to eliminate these forms of discrimination by advocating active recognition of caste induced vulnerabilities by humanitarian stakeholders to make inclusion in Disaster Risk Reduction a reality.

About Us and our work